Too Much Profanity on the Big and Small Screen? 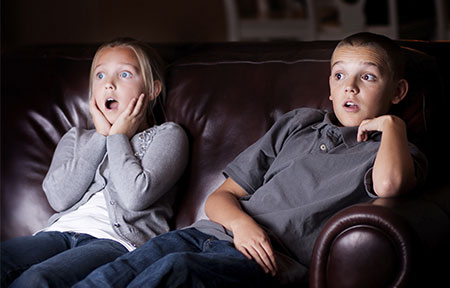 Profanity in the movies is nothing new – and even existed before movies had the advent of sound. In 1939, the Academy Award-winning epic movie Gone with the Wind ignored the authority and risked being fined rather than removing profane language from their final cuts.

Gone with the Wind was the first widely released motion picture to feature swear words since the Motion Picture Association of America’s ban on profanity in 1934. Rhett Butler’s historic line to Scarlett is also the most popular movie line ever quoted, per the American Film Institute. Today the number of profanities in movies has increased significantly. Martin Scorsese's 2013 film The Wolf of Wall Street, in fact, has the most swear words out of any other film in history, averaging over 2 profanities for every minute of screen time.

Disney-Owned ABC TV Has the Most Profanity

Television is not much better. A new study by the Parents Television Council found that broadcast networks are increasingly creating and airing programs in which sexualized and adult language is being spoken by minor-aged child actors. The study examined prime-time programming on the four major broadcast networks (ABC, CBS, NBC, and Fox) from February through May 2016. The study found: 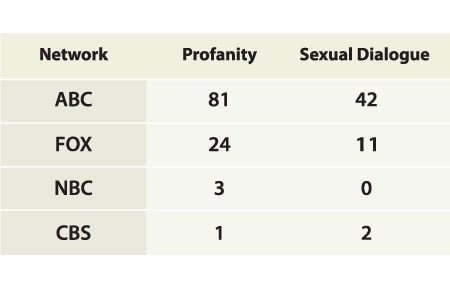 Various scientific studies suggest that when children observe behavior modeled by similarly-aged children on television, they will perceive those behaviors as normative and acceptable. Dr. Brad J. Bushman, professor of Communications & Psychology at Ohio State University said, “Children are likely to learn profanity and sexual language from the models they observe in the TV programs they watch. Because these models are rewarded for their behaviors (e.g., audience members laugh when they use profane of sexual language) and because the models are young people viewers can identify with, viewers should be especially likely to imitate them”

Don’t even get me started on what can be viewed in the YouTube video comments, Facebook, Twitter and other Internet sites and mobile apps. But did you know that one of the most concerning places children can be exposed to profanity is Wikipedia? Most children visit Wikipedia to assist with a school project regularly during the school year. Wikipedia does not filter content based on the age of the visitor and even has a page dedicated to why they use profanity on their site. Listed below are their top 5 reasons:

The good news about Wikipedia and other websites is that masking profanity has never been easier.

What Can Parent’s Do to Limit Exposure to Profanity?

Consider a profanity filter that can be used on devices where your child views media. The good news is that there are some great options for parents to minimize exposure to profanity.

Profanity is everywhere on the Internet. Over 47% of Facebook pages are covered in profanity and 56% of comments with profanity are written by “friends”, per Reppler, a Facebook monitoring service. Many sites, such as YouTube or blogs, permit users to leave feedback or comments directly on each page – some of which are inappropriate or profane.

Some Internet filters might block those pages entirely. However, with Net Nanny, you can view websites that include profanity without being subjected to reading the profanity.

When Profanity Masking is selected in the Remote Admin Console, a User will see web pages that contain profanity, but the vulgar words on the screen will be replaced by special characters (example below). 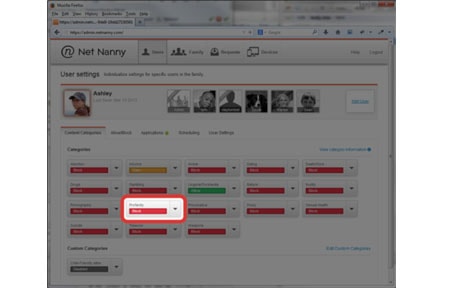 This video was so %$# stupid and their other video was complete @#$ too.

All televisions larger than 13 inches and made since January 1st, 2000 and personal computers that include a television tuner and a monitor of 13 inches or more are required to contain a "V-Chip," which parents can use to block inappropriate programming they don’t want children to watch based on TV ratings. Ratings appear in the upper left corner of your television screen during the first 15 seconds of each program and often after commercial breaks. The ratings are:

How to Program the V-Chip

The V-Chip Parental Control setup on most electronics includes the steps listed below:

If you run into any challenges using your V-chip, consult your electronics manual for specific instructions.

For viewing movies at home, an excellent product to consider is ClearPlay. ClearPlay filters language and scenes that include violence, profanity, nudity while a movie is playing, all based on the family’s own personal settings. Families can view movies online at ClearPlay.com or through the ClearPlay DVD or BluRay player.

In 2005, ClearPlay was a primary sponsor of the Family Movie Act, helping pass legislation that amended copyright law and clarified the legality of movie filtering. (Note: Net Nanny has no affiliation with ClearPlay.)

Selecting The Right Parental Controls for Your Family

As parents, we can’t always be present when our children are exposed to inappropriate content. The parental control filters listed above provide peace of mind to allow our children to have freedom to explore the internet, TV, and movies with boundaries appropriate for their age and guidelines your family setups.