How to Motivate Your Teenager to Do School Work 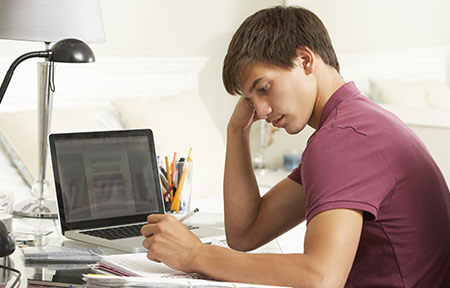 Motivating a teenager to get out of bed can be challenging enough without the added stress of motivating them to do their schoolwork too. Which is why, for most over-worked, over-stressed parents, the go-to response when their teen says, “I don’t feel like doing it” is, “I don’t care, do it now.”

Unfortunately, this only escalates the situation, making it ineffective in motivating a teenager. Luckily, you don’t need a long list of psychology-based ideas to learn how to motivate a teenager. With the following tactics in your arsenal, you’ll both walk away understood and prepared for the year ahead.

If your teen is struggling to find motivation, there’s likely a good reason for it. Don’t just assume it’s laziness. “The image of the lazy teenager has become so commonplace that many people simply assume that being lazy and unmotivated is a natural consequence of adolescence. Such thinking, while understandable, is essentially misguided,” says Chris Hudson, speaker and coach.

Instead, talk with them to uncover potential stresses that they wouldn’t normally tell you. For example, teenagers are likely to keep bullying/cyberbullying, alcohol/drug abuse, eating disorders and sexual abuse from you, according to psychotherapist Elizabeth Donovan. All of these things could be reasons why they don’t want to go to school or are too distracted to do their work.

Focus on the Positive

If your teen struggles with school, or did poorly the year before, it’s time to focus on what went well instead. Focus on the positive memories they cared about, like: ‘Remember you won an award for your science project?’ Or, ‘Remember how all your classmates chose your idea for the class field trip?’

Also use this as an opportunity to focus on how they can learn from the moments when they struggled most. “I looked at it this way: the test was over, and he failed it. That was the natural consequence. I didn’t need to make speeches at him or blame him, because that’s not an effective way to get change. I was interested in what he was going to do so he would pass the next test,” says James Lehman, MSW.

Have an open discussion asking your teenager to really think about what they learned and how they’ll change the outcome in the future. This is a mindset that will set them up for success later in life as well.

Put Them in the Driver’s Seat

Your teenager wants to be treated like an adult, so let them feel like one. There are many ways you can do this, while ensuring that they still get their work done. Try one or two of the ideas below to see which resonates most with your teenager:

The answer to motivating your teenager is as simple as making it easier for them to remember when work is due or when it’s time to do homework. Luckily, with technology, this is easy to execute and manage. Try one of the following apps:

Famjama: This web-based app syncs with Google Calendars so you can add due dates for homework, projects and tests. Each family member can log in and see his or her own personalized dashboard, so your teenager will feel in control and you can feel less stressed.

Cozi: This app has been featured on Today, Parents, Huffington Post and more for a reason—it’s an easy way to manage your whole life. Create a to-do list for your teenager, add items to the family calendar, and use color-coded dots to make it easy for everyone to scan.

The average teenager needs 8 to 10 hours of sleep each night according to the National Sleep Foundation. One study found only 15% of teens sleep 8 ½ hours on school nights. Consider charging your teen’s phone overnight in a parent’s room or using a the time management tools from Net Nanny® to pause the internet during overnight hours so your child’s sleep is not interrupted by sound or light from their electronic devices.

Motivating your teen can feel like a never-ending battle from the moment they wake up until the moment they go to bed. Using these strategies will not only make it easier for you to manage the stress, but will also help your teenager develop skills that allows them to be more successful as they grow.

Jessica Thiefels  is currently a lifestyle and education blogger and the editor of Whooo's Reading and Carpe Daily. She's been featured on PBS.org, Home.com and FamilyEducation.com.